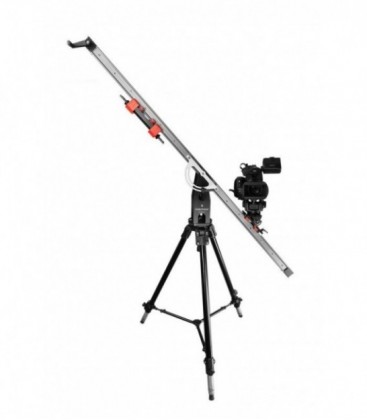 DollyCrane is an innovative Grip system combining the function of the camera crane, mini-jib and dolly/slider.

Once set up, the system can instantly change its function from dolly/slider to crane and back thanks to it’s unique construction.

The DollyCrane can be assembled quickly by just one operator using standard – heavyweight tripods.

The DollyCrane will carry any camera up to 10kg.

By utilizing a movable counterweight, the camera can be tracked up to 160 cm, much further than in typical sliders.

The slider rail can be set at almost any angle (max. 60 degrees plus exact vertical 90 degrees movement) and with the counterweight system, the camera can be moved up and down the slider without minimal effort.

As the camera moves in one direction, the counterweight tracks in the opposite direction, allowing for continuous perfect balance and control.

The movement of dolly and counterweight is very silent.

When configured as a crane the camera can move parallel to the ground, and execute crane movements in 3 axis, up to a maximum lens height of 3m (depending on base tripod)

In its mini-jib configuration, the DollyCrane operator can tilt, pan and move the camera 360 degrees around the base tripod with a maximum lens height of 3m.